L.B. Foster has completed the installation of a continuously moving, inverted monorail conveyor for a dashboard sub assembly line at Honda’s UK manufacturing plant in Swindon.

Designed to transport new Honda Civic dashboards around a 20-station assembly line in Car Plant 2, the L.B. Foster conveyor has increased the process efficiency and reliability of the line. It is an enclosed track, equally pitched trolley conveyor, constructed to pull the 20 individual trolleys carrying the dashboards around the assembly line. The conveyor runs at a speed ranging from 700mm to 1700mm per minute.

Trolley conveyors are one of a comprehensive range of floor conveyors manufactured by L.B. Foster. They consist of a floor mounted, enclosed track conveyor towing a series of work trolleys to carry the products.

This type of conveyor provides stable transportation and is particularly useful when the products to be carried are an unusual shape or size for traditional conveying. A trolley conveyor can be mounted on the floor or should a flush floor be required; they can be mounted within an excavated pit with floor plates to cover the gap.

Being robust, the conveyor requires low maintenance which is important for long term cost efficiency

A proven design for Honda

Over 3,500 people work at Honda’s busy manufacturing site in Swindon. Each shift builds 300 cars which are destined for the UK, Europe and Russia. Neil Adams is one of Honda’s New Model Project Engineers; he explains why a new conveyor became a necessity for the dashboard assembly line in Plant 2.

“The dashboard of our new Honda Civic model uses the latest technology so we needed more work stations and therefore a longer assembly line to be able to build it. Originally we had a 10 station conveyor to build the current dashboard; with the extra processes we needed to double that to 20 stations.”

“I made a shortlist of three companies and when the quotes came in, the one from L.B. Foster was the most cost effective we received. It was for a monorail conveyor built around a 42m loop constructed from a proven design which is particularly suitable for the automobile industry. Although I had considered a friction drive conveyor, the one we selected from L.B. Foster is a predominantly electronic, chain driven conveyor. Being robust, the conveyor requires low maintenance which is important for long term cost efficiency. The conveyor is also future model proofed – to assemble a different dashboard we only need to redesign the jig to fit a new model.”

He continues, “We had a very tight installation timescale of just four days to take out the old conveyor and install the new one. Work started as soon as production finished on Thursday and due to a detailed installation programme and a lot of hard work over the weekend the conveyor ran perfectly in time for the Tuesday morning shift.”

“L.B. Foster also developed the software controls for the system. Software reliability is particularly important as the controls for each sub assembly line link into Honda’s main assembly line software. Every assembly line is sequenced so as each finished dashboard comes off the line it is immediately transferred across a short gangway to the main assembly line. Here it is fitted into a car body which is exactly in position to receive the dashboard. Working in this systematic way, a new Honda car is produced every 85 seconds.” 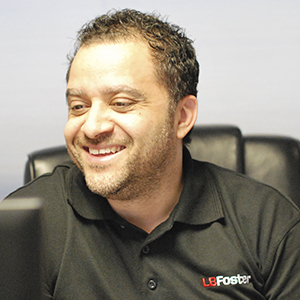